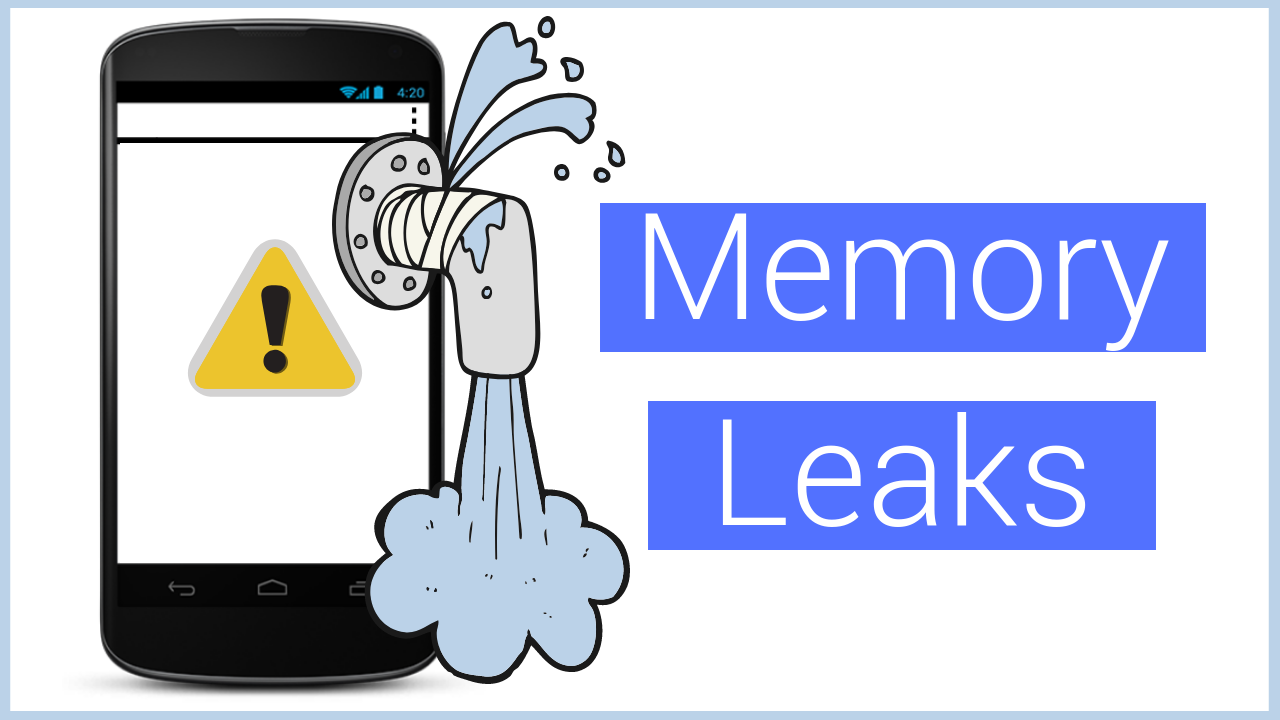 Prefer to watch video instead of read? Watch here.


In this blog post I'm going to talk about memory leaks on Android.

First I'll talk about what they are, why you want to avoid them, and the most common ways they occur. This will include some practical examples (of course).

Then I'll talk about how to avoid them, how to find them in your code (using a handy library), and some cool tricks that I've learned.


What is a Memory Leak?


Every Android device has a fixed amount of memory. And every process on the device requires memory to operate. That includes your applications.

This fixed amount of memory is known as the heap. So at any given time, the amount of freely available memory will be in the heap.

When an object is created, memory is removed from the heap.

To prevent the android system from getting overwhelmed under heavy loads, some objects are automatically cleaned up by something know as the garbage collector, or GC for short.

The GC has a built-in algorithm for determining which objects to clean up and effectively destroy. When the GC "cleans up" an object, the memory that the object occupied is returned to the heap. To understand memory leaks, you must understand the GC.

A memory leak occurs when the GC is unable to clean up an object or a set of objects. The result is essentially a lost chunk of memory that can not be regained. Obviously this is not a good thing as memory is a finite resource.


By definition, a memory leak will occur when memory is allocated (example: an object is created), but that object is never freed (example: the object is never released from memory). There's several ways this can happen. The most common way by far is saving a reference to a view or a context inside a background thread.

Keep in mind the same goes for a Context object. If you save a reference to the Context or an Activity, you run the same risks.


How to Avoid Memory Leaks


The way I see it, there's 2 practical things you can do to avoid memory leaks. Keep in mind the main goal here is to avoid saving a reference to a Context, Activity, or View object inside a background thread.


GC events can cause your application to lag. For example if you have a large number of GC events happening all at the same time, chances are, your app UI will lag. So the question becomes, how can you avoid allocating a large number of objects in a short period of time? When does that happen?

One example is declaring new objects inside a nested loop. Every time the loop runs, a new object is declared and therefore a new block of memory is removed from the heap. Eventually the GC will have to step in a clean up the mess you've made.

Nested loops are usually a good thing to avoid when possible, but if you can't, try doing something like this instead. Declare a single object outside the loop. Then assign it inside the loop.

Staying in the Loop