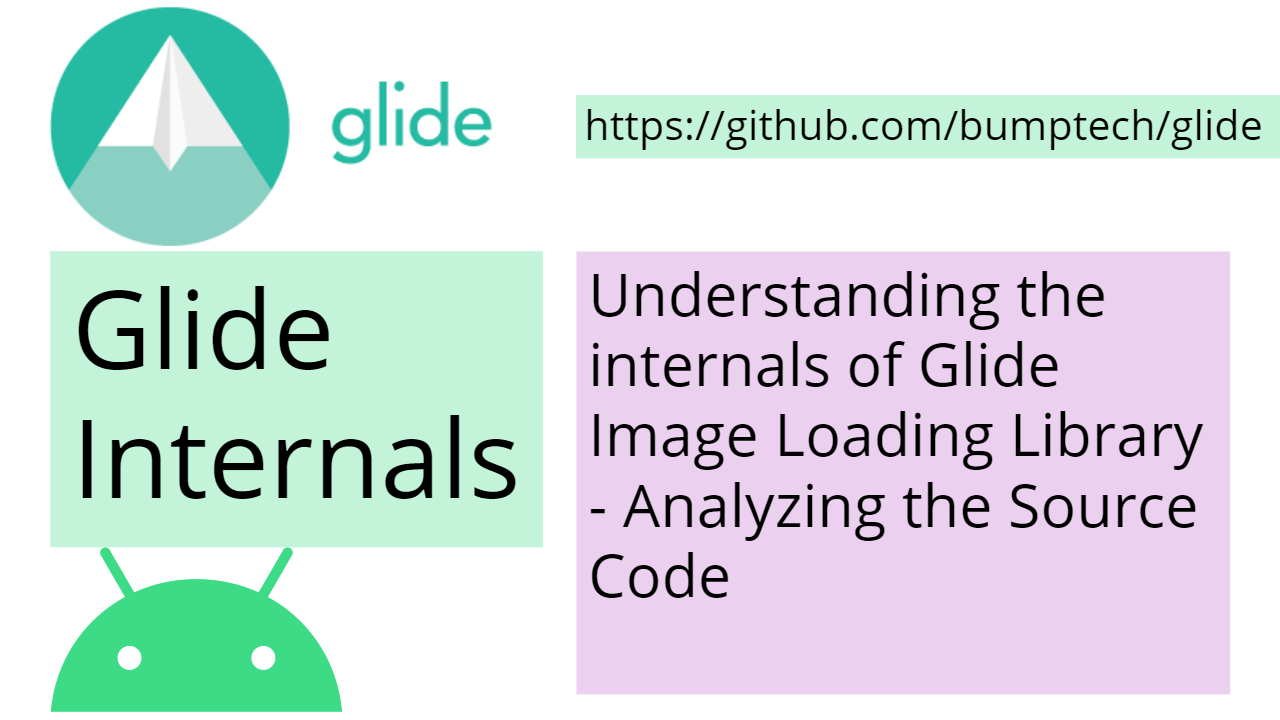 
The internals of the Glide Image Loading Library - Analyzing the Source Code blog post focuses on the source code behind the one single line of Glide. This blog is in no way exhaustive. Glide library though simple is HUGE behind the scenes. We do not cover the caching mechanism here, coming soon.


Generally speaking, we use the following code to load an image:

We will explore the source code behind this line.

Let us take a look at the modules in Glide. 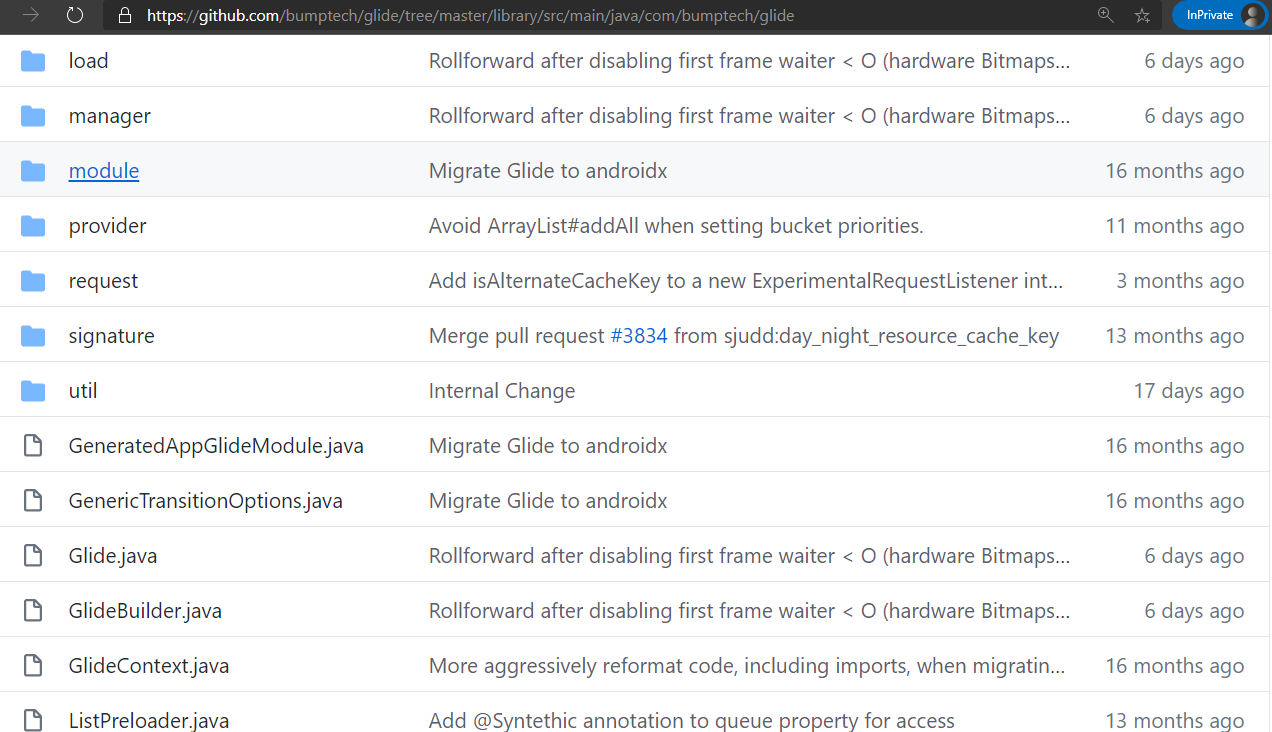 Understanding the main outermost classes. First, we have Glide.

Glide is a singleton class, and the instance can be obtained through the Glide#get(Context) method. 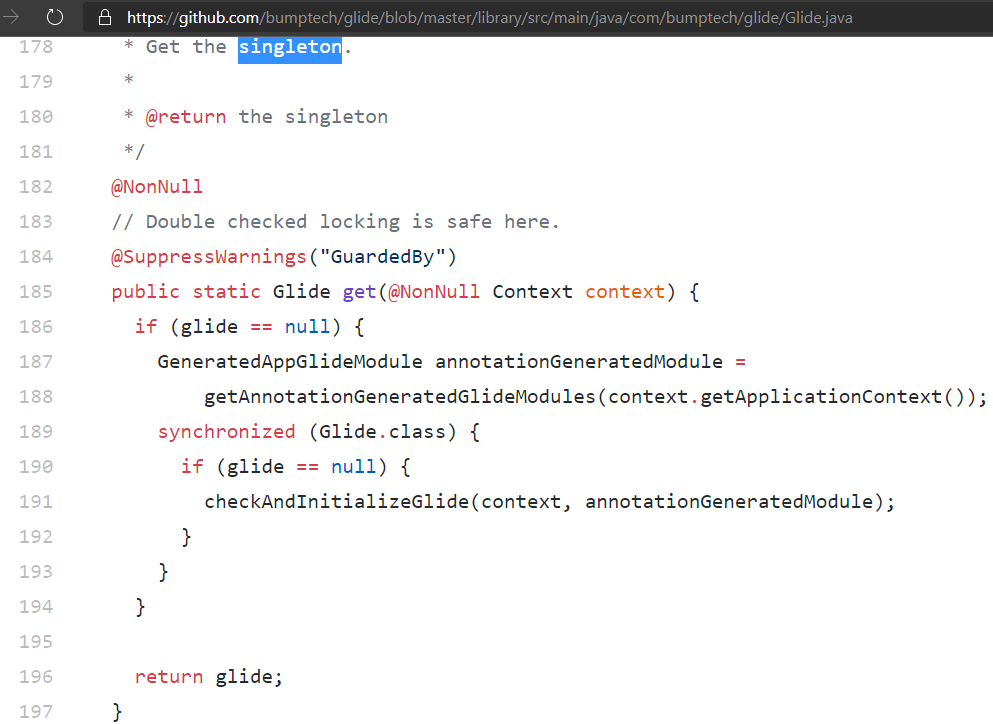 The Glide class is a global configuration class. Encoder, Decoder, ModelLoader ... are all set here. It also provides an interface for creating RequestManager (Glide#with() method). We take a look at the RequestManager later.

When using Glide, the Glide#with() method is called first to create a RequestManager. The with() method in Glide has five overloads:


GlideBuilder is a class used to create Glide instances, which contains many getters and setter methods, such as setting BitmapPool, MemoryCache, ArrayPool, DiskCache, MemorySizeCalculator, and a few more. 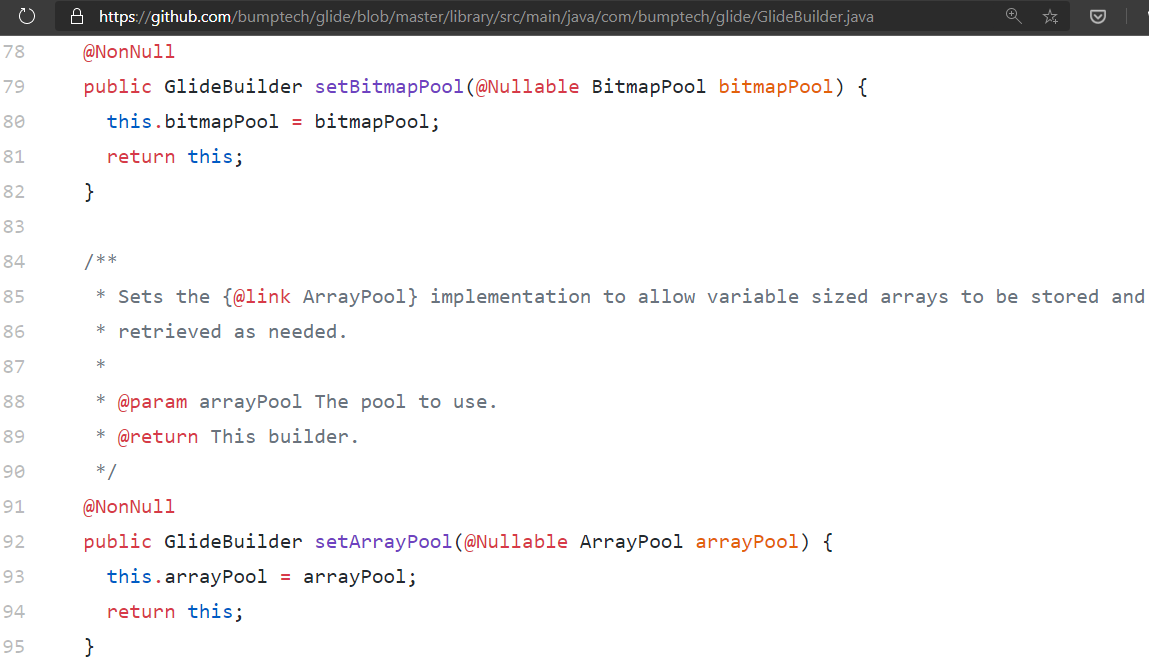 These array pools, cache implementations, etc. will eventually be used as parameters of the Glide constructor to create Glide instances. 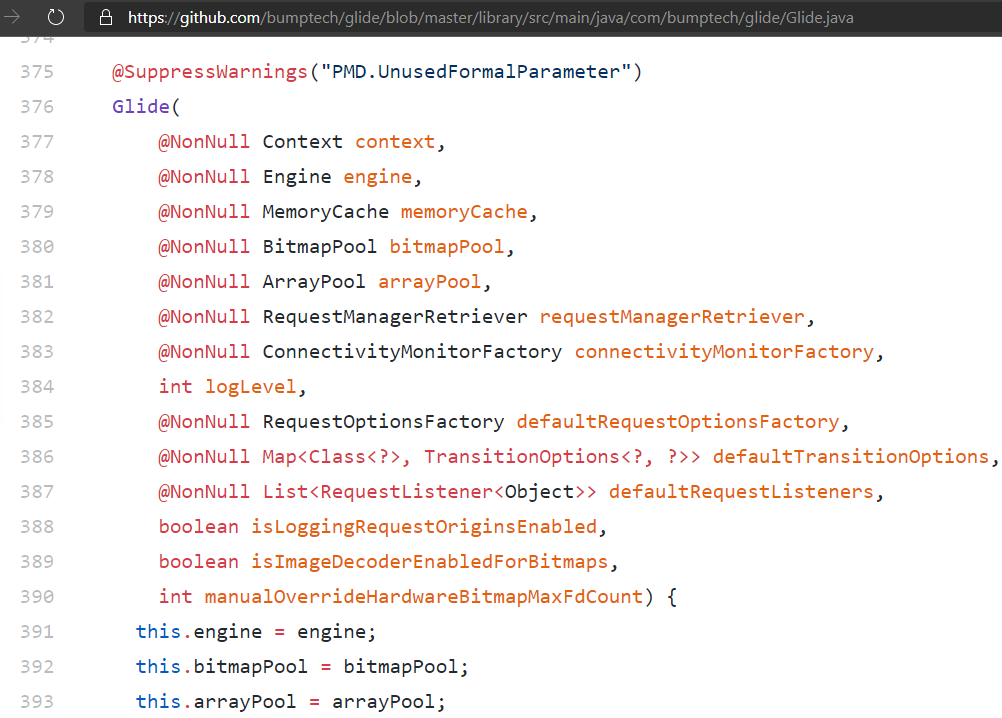 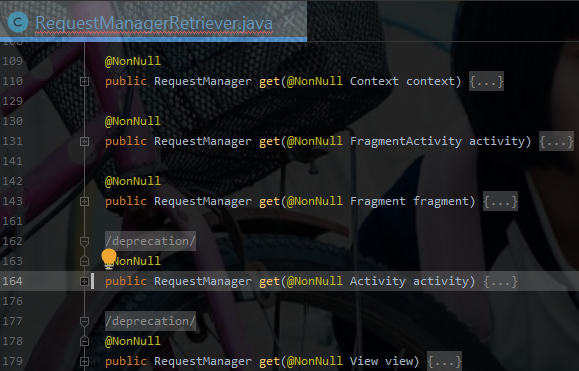 The logic for creating RequestManager is as follows:

If the parameter of the with method is Activity or Fragment, call the fragmentGet(Context, android.app.FragmentManager) method in RequestManagerRetriever to create the RequestManager.

TIf the parameter of the with method is Context, it will determine whether the source belongs to FragmentActivity and Activity. If it is, it will be evaluated according to the above logic, otherwise, the getApplicationManager(Context) method will be called to create the RequestManager. 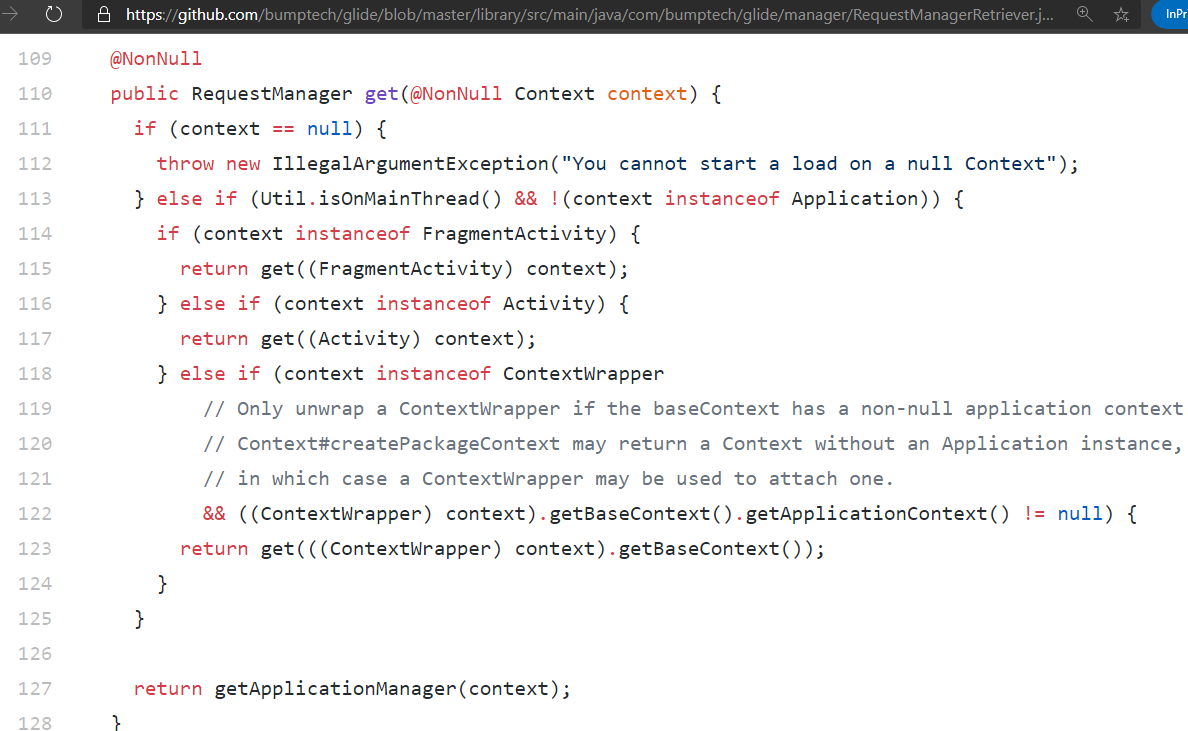 If the background thread calls Glide#with() or the system version is less than 17 i.e JELLY_BEAN_MR1, the getApplicationManager(Context) method will eventually be called to create the RequestManager.

We all know that when using Glide to load a picture if the current screen is destroyed or invisible, it will stop loading the image, but when we use Glide to load the image, we just pass a Context object, so how does Glide get the screen lifecycle through a context object?

There are many load methods to create RequestBuilder:

1. A new request builder for downloading content to cache and returning the cache File:


RequestBuilder is a generic class used to build requests, such as setting RequestOption, thumbnails, etc. 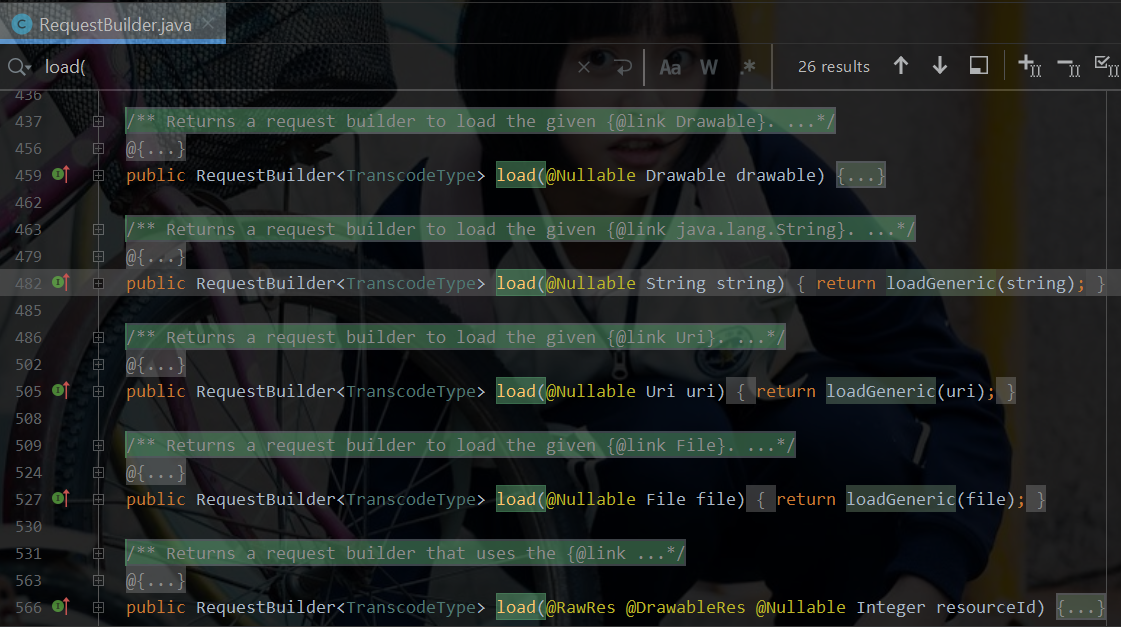 
There are three main classes for Request:

SingleRequest is a class that is responsible for executing the request and reflecting the result to the Target.

When we fail to load the image, we might want to continue to load another image through the network or other means, for example:

When we use error in this way, it will eventually create an ErrorRequestCoordinator object. 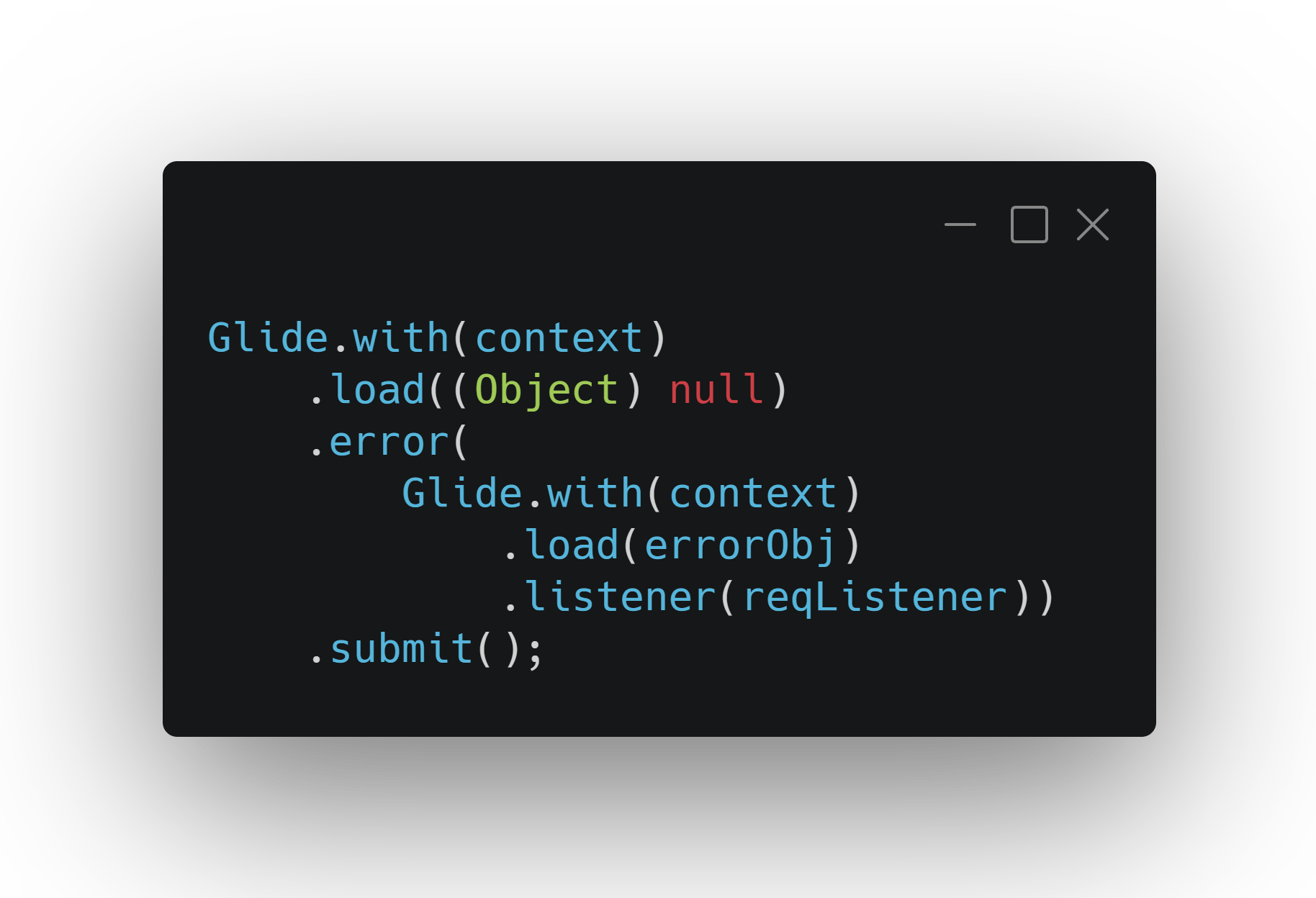 
Target represents a resource that can be loaded by Glide and has a lifecycle.

When we call the RequestBuilder#into method, the Target implementation class of the corresponding type will be created based on the incoming parameters.


GlideModule is an interface allowing lazy configuration of Glide.

The code of GlideModule is straightforward:

You can see that the interface is annotated as deprecated. Glide recommends using AppGlideModule instead.

The GlideModule interface itself has no code content, but it inherits the RegistersComponents and AppliesOptions interfaces.


A factory interface for translating an arbitrarily complex data model into a concrete data type that can be used by a DataFetcher to obtain the data for a resource represented by the model.

This interface has two objectives:

1. To translate a specific model into a data type that can be decoded into a resource.

2. To allow a model to be combined with the dimensions of the view to fetch a resource of a specific size.

The internal implementation is to initiate a network request or open a file, or open a resource, etc.

After the loading is completed, the callback is made through the DataFetcher$DataCallback interface.

There are two methods in DataCallback:


Encoder is an interface for writing data to some persistent data store (i.e. a local File cache).

There is only one method called encode and the comments explain it quite well.


ResourceDecoder is an interface for decoding resources. It is used to decode the original data into the corresponding data type.


Engine is a class which is responsible for starting loads and managing active and cached resources.

Focusing on the load method, this method mainly does the following:

2. Obtain resources from active resources and return when obtained.

3. Get the resource from the cache and return it directly when you get it.

4. Judge whether the current request is being executed, if yes, return directly.


This is mainly used to execute DecodeJob and manage the callback of loading completion and various listeners.


DecodeJob is a class responsible for decoding resources either from cached data or from the original source and applying transformations and transcodes.

The loading of images is ultimately implemented through DataFetcher, but it is not directly called here. DataFetcherGenerator is used here.


Contributions and Pull requests are welcomed at https://github.com/androiddevnotes repositories!

Glide Caching - How it works